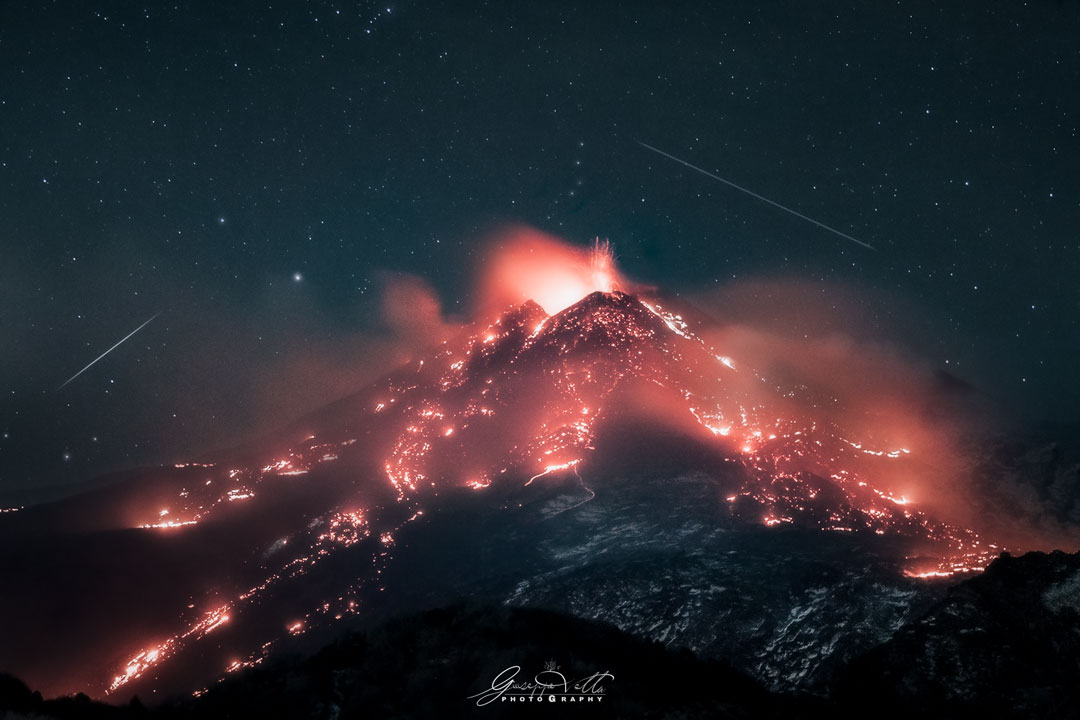 Mt. Etna has been erupting for hundreds of thousands of years. Located in Sicily, Italy, the volcano produces lava fountains over one kilometer high. Mt. Etna is not only one of the most active volcanoes on Earth, it is one of the largest, measuring over 50 kilometers at its base and rising nearly 3 kilometers high. Pictured erupting last month, a lava plume shoots upwards, while hot lava flows down the volcano’s exterior. Likely satellite trails appear above, while ancient stars dot the sky far in the distance. This volcanic eruption was so strong that nearby airports were closed to keep planes from flying through the dangerous plume. The image foreground and background were captured consecutively by the same camera and from the same location. via NASA 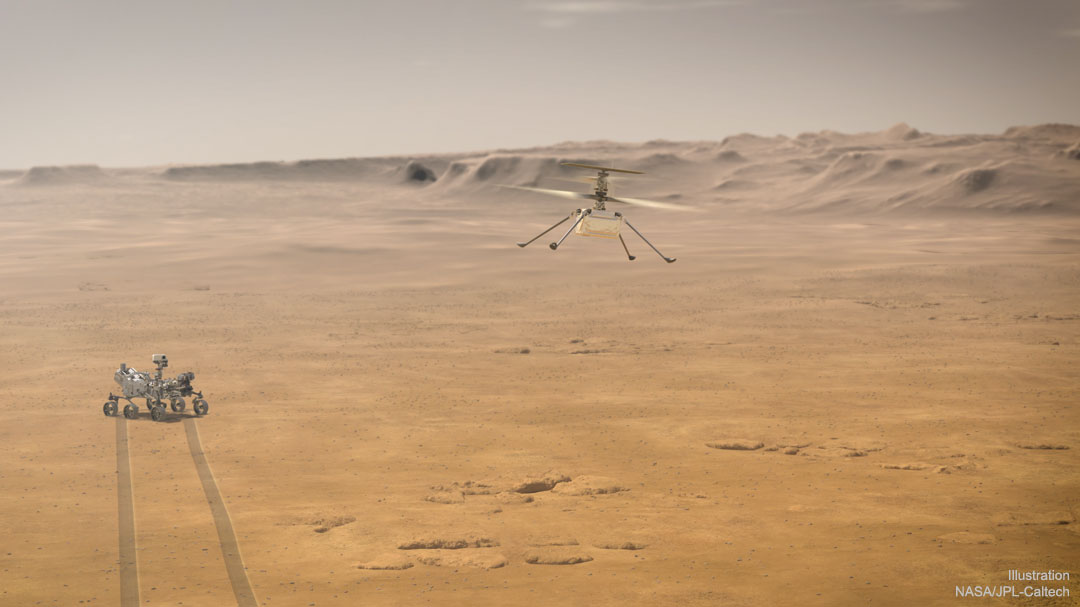 What if you could fly around Mars? NASA may have achieved that capability last month with the landing of Perseverance, a rover which included a small flight-worthy companion called Ingenuity, nicknamed Ginny. Even though Ginny is small — a toaster-sized helicopter with four long legs and two even-longer (1.2-meter) rotors, she is the first of her kind — there has never been anything like her before. After being deployed, possibly in April, the car-sized Perseverance (“Percy”) will back away to give Ginny ample room to attempt her unprecedented first flight. In the featured artistic illustration, Ginny’s long rotors are depicted giving her the lift she needs to fly into the thin Martian atmosphere and explore the area near Perseverance. Although Ingenuity herself will not fly very far, she is a prototype for all future airborne Solar-System robots that may fly far across not only Mars, but Titan. via NASA 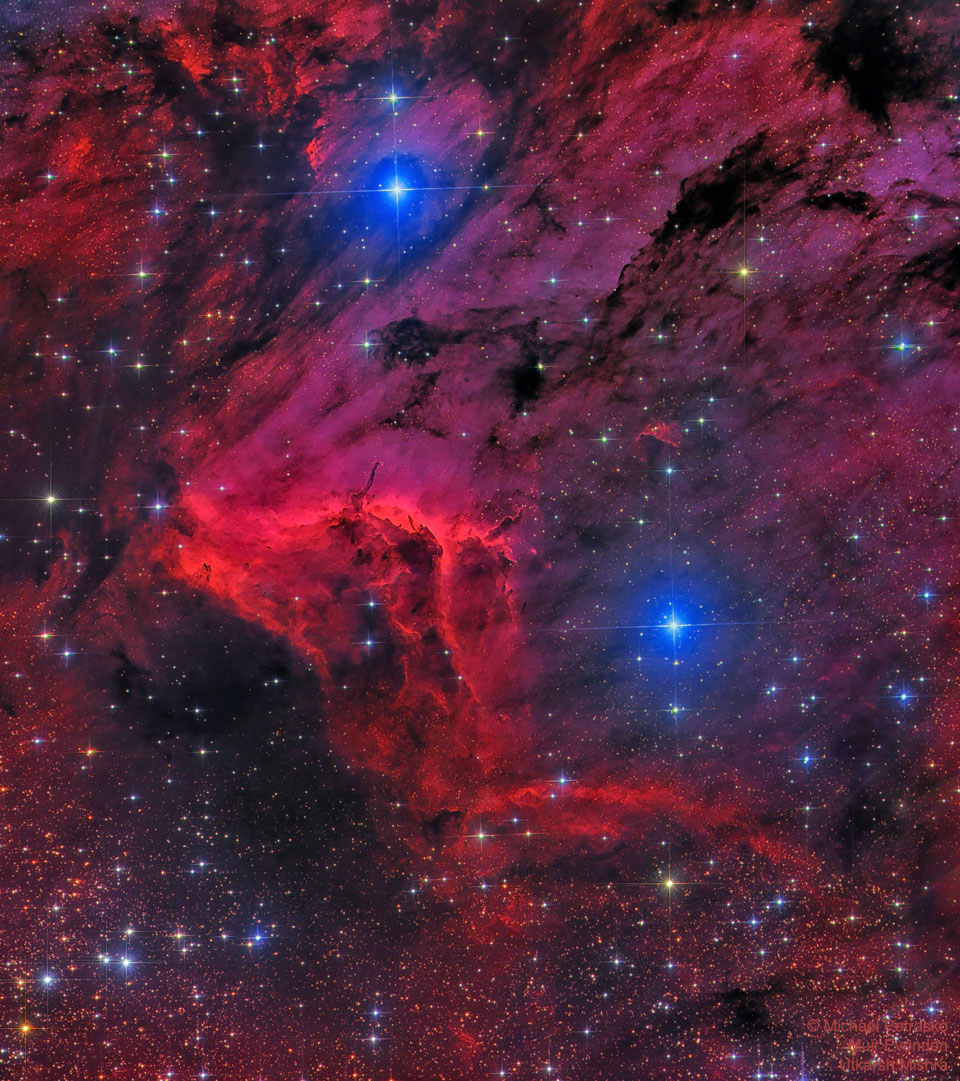 The Pelican Nebula is changing. The entire nebula, officially designated IC 5070, is divided from the larger North America Nebula by a molecular cloud filled with dark dust. The Pelican, however, is particularly interesting because it is an unusually active mix of star formation and evolving gas clouds. The featured picture was processed to bring out two main colors, red and blue, with the red dominated by light emitted by interstellar hydrogen. Ultraviolet light emitted by young energetic stars is slowly transforming cold gas in the nebula to hot gas, with the advancing boundary between the two, known as an ionization front, visible in bright red across the image center. Particularly dense tentacles of cold gas remain. Millions of years from now this nebula might no longer be known as the Pelican, as the balance and placement of stars and gas will surely leave something that appears completely different. via NASA 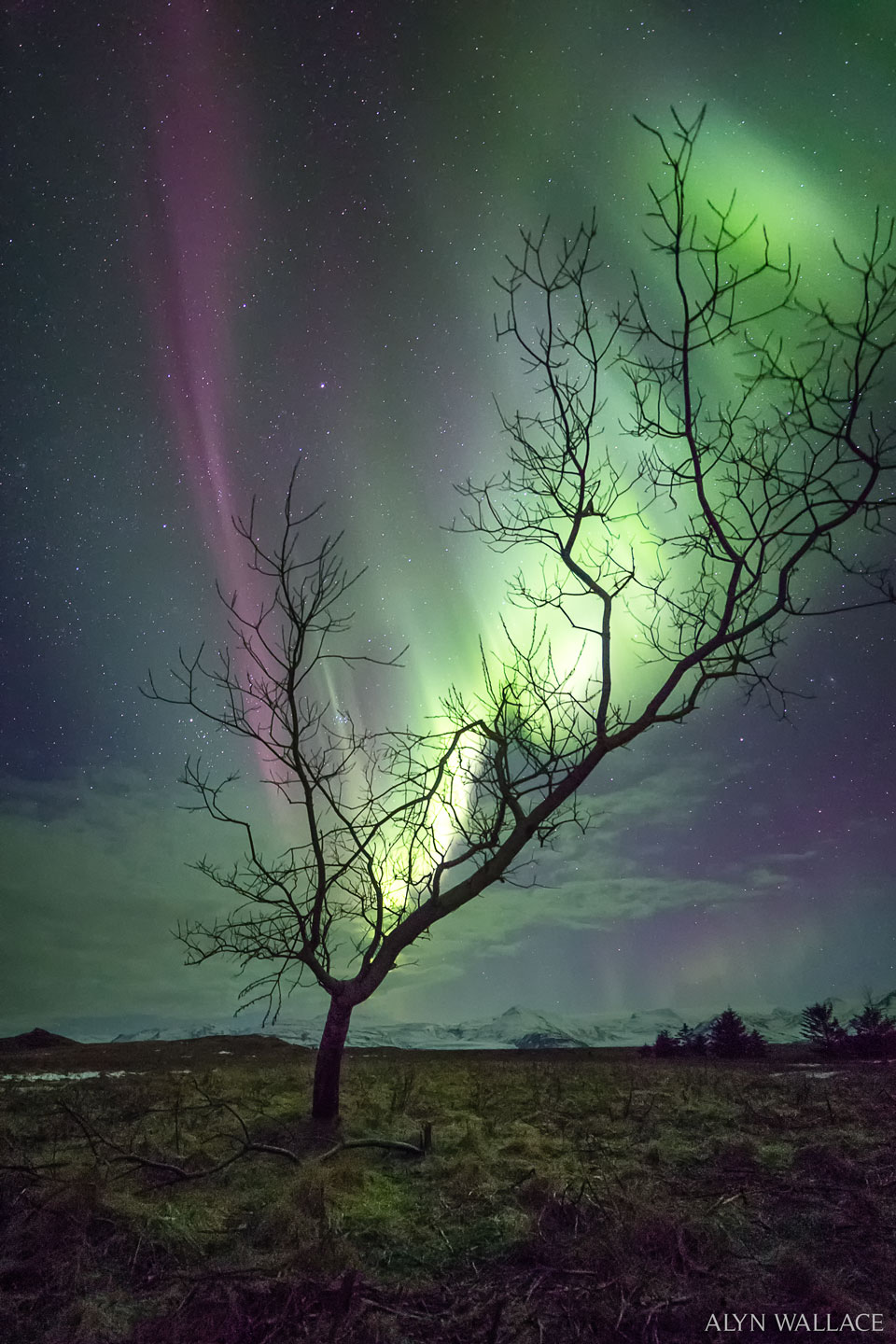 Yes, but can your tree do this? Pictured is a visual coincidence between the dark branches of a nearby tree and bright glow of a distant aurora. The beauty of the aurora — combined with how it seemed to mimic a tree right nearby — mesmerized the photographer to such a degree that he momentarily forgot to take pictures. When viewed at the right angle, it seemed that this tree had aurora for leaves. Fortunately, before the aurora morphed into a different overall shape, he came to his senses and capture the awe-inspiring momentary coincidence. Typically triggered by solar explosions, aurora are caused by high energy electrons impacting the Earth’s atmosphere around 150 kilometers up. The unusual Earth-sky collaboration was witnessed in March of 2017 in Iceland. via NASA

Seen from orbit a day after a dramatic arrival on the martian surface, the Perseverance landing site is identified in this high-resolution view from the Mars Reconnaissance Orbiter. The orbiter’s camera image also reveals the location of the Mars 2020 mission descent stage, heat shield, and parachute and back shell that delivered Perseverance to the surface of Mars. Each annotated inset box spans 200 meters (650 feet) across the floor of Jezero Crater. Perseverance is located at the center of the pattern created by rocket exhaust as the descent stage hovered and lowered the rover to the surface. Following the sky crane maneuver, the descent stage itself flew away to crash at a safe distance from the rover, its final resting place indicated by a dark V-shaped debris pattern. Falling to the surface nearby after their separation in the landing sequence, heat shield, parachute and back shell locations are marked in the high-resolution image from Mars orbit. via NASA

Stitched together on planet Earth, 142 separate images make up this 360 degree panorama from the floor of Jezero Crater on Mars. The high-resolution color images were taken by the Perseverance rover’s zoomable Mastcam-Z during mission sol 3, also known as February 21, 2021. In the foreground of Mastcam-Z’s view is the car-sized rover’s deck. Broad light-colored patches in the martian soil just beyond it were scoured by descent stage rocket engines during the rover’s dramatic arrival on February 18. The rim of 45 kilometer-wide Jezero Crater rises in the distance. In the coming sols, Perseverance will explore the ancient lake-delta system in the crater, hunting for signs of past microscopic life and collecting samples for potential future return to planet Earth. via NASA 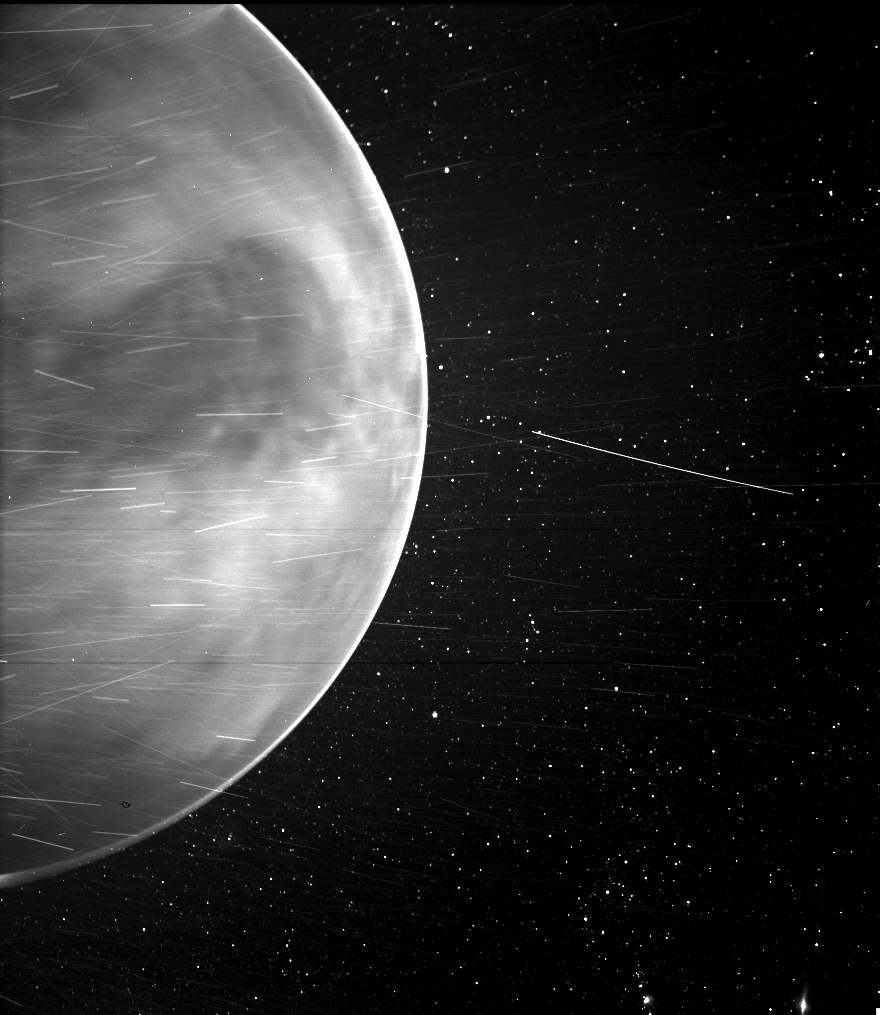 On a mission to explore the inner heliosphere and solar corona, on July 11, 2020 the Wide-field Imager on board NASA’s Parker Solar Probe captured this stunning view of the nightside of Venus at distance of about 12,400 kilometers (7,693 miles). The spacecraft was making the third of seven gravity-assist flybys of the inner planet. The gravity-asssist flybys are designed to use the approach to Venus to help the probe alter its orbit to ultimately come within 6 million kilometers (4 million miles) of the solar surface in late 2025. A surprising image, the side-looking camera seems to peer through the clouds to show a dark feature near the center known as Aphrodite Terra, the largest highland region on the Venusian surface. The bright rim at the edge of the planet is nightglow likely emitted by excited oxygen atoms recombining into molecules in the upper reaches of the atmosphere. Bright streaks and blemishes throughout the image are likely due to energetic charged particles, and dust near the camera reflecting sunlight. Skygazers from planet Earth probably recognize the familiar stars of Orion’s belt and sword at lower right. via NASA

Itâ€™s always nice to get a new view of an old friend. This stunning Hubble Space Telescope image of nearby spiral galaxy M66 is just that. A spiral galaxy with a small central bar, M66 is a member of the Leo Galaxy Triplet, a group of three galaxies about 30 million light years from us. The Leo Triplet is a popular target for relatively small telescopes, in part because M66 and its galactic companions M65 and NGC 3628 all appear separated by about the angular width of a full moon. The featured image of M66 was taken by Hubble to help investigate the connection between star formation and molecular gas clouds. Clearly visible are bright blue stars, pink ionized hydrogen clouds — sprinkled all along the outer spiral arms, and dark dust lanes in which more star formation could be hiding. via NASA

What would it look like to land on Mars? To better monitor the instruments involved in the Entry, Decent, and Landing of the Perseverance Rover on Mars last week, cameras with video capability were included that have now returned their images. The featured 3.5-minute composite video begins with the opening of a huge parachute that dramatically slows the speeding spacecraft as it enters the Martian atmosphere. Next the heat shield is seen separating and falls ahead. As Perseverance descends, Mars looms large and its surface becomes increasingly detailed. At just past 2-minutes into the video, the parachute is released and Perseverance begins to land with dust-scattering rockets. Soon the Sky Crane takes over and puts Perseverance down softly, then quickly jetting away. The robotic Perseverance rover will now begin exploring ancient Jezero Crater, including a search for signs that life once existed on Earth’s neighboring planet. via NASA

What’s that on either side of the Moon? Starships. Specifically, they are launch-and-return reusable rockets being developed by SpaceX to lift cargo and eventually humans from the Earth’s surface into space. The two rockets pictured are SN9 (Serial Number 9) and SN10 which were captured near their Boca Chica, Texas launchpad last month posing below January’s full Wolf Moon. The Starships house liquid-methane engines inside rugged stainless-steel shells. SN9 was test-launched earlier this month and did well with the exception of one internal rocket that failed to relight during powered descent. SN10 continues to undergo ground tests and may be test-launched later this month. via NASA